April is definitely the BEST time of year to discover Nepal and its incredible culture. Why? Because of the celebrations of the main Nepalese New Year. Then, the festivals of the Kathmandu Valley, especially in Bhaktapur, will be the most memorable stops in your journey.

Back to the beginning: the Nepalese calendars

In April 2021, Nepal celebrates the beginning of the year 2078. The official Nepalese calendar (Bikram Sambat) starts in 57 BC, at the beginning of Bikram’s reign, the mythical Hindu ruler. It is a lunar calendar with 12 months, each one divided into 2 fortnights (the “dark” one, the “light” one).

But that’s not all! Two other calendars are also used in Nepal:

Now, you understand the complexity of the Nepalese calendar (or more precisely calendars!). To know the dates of festivities, you have to wait until the release of the patro (calendars) published each year by a special commission of astrologers (joshi). 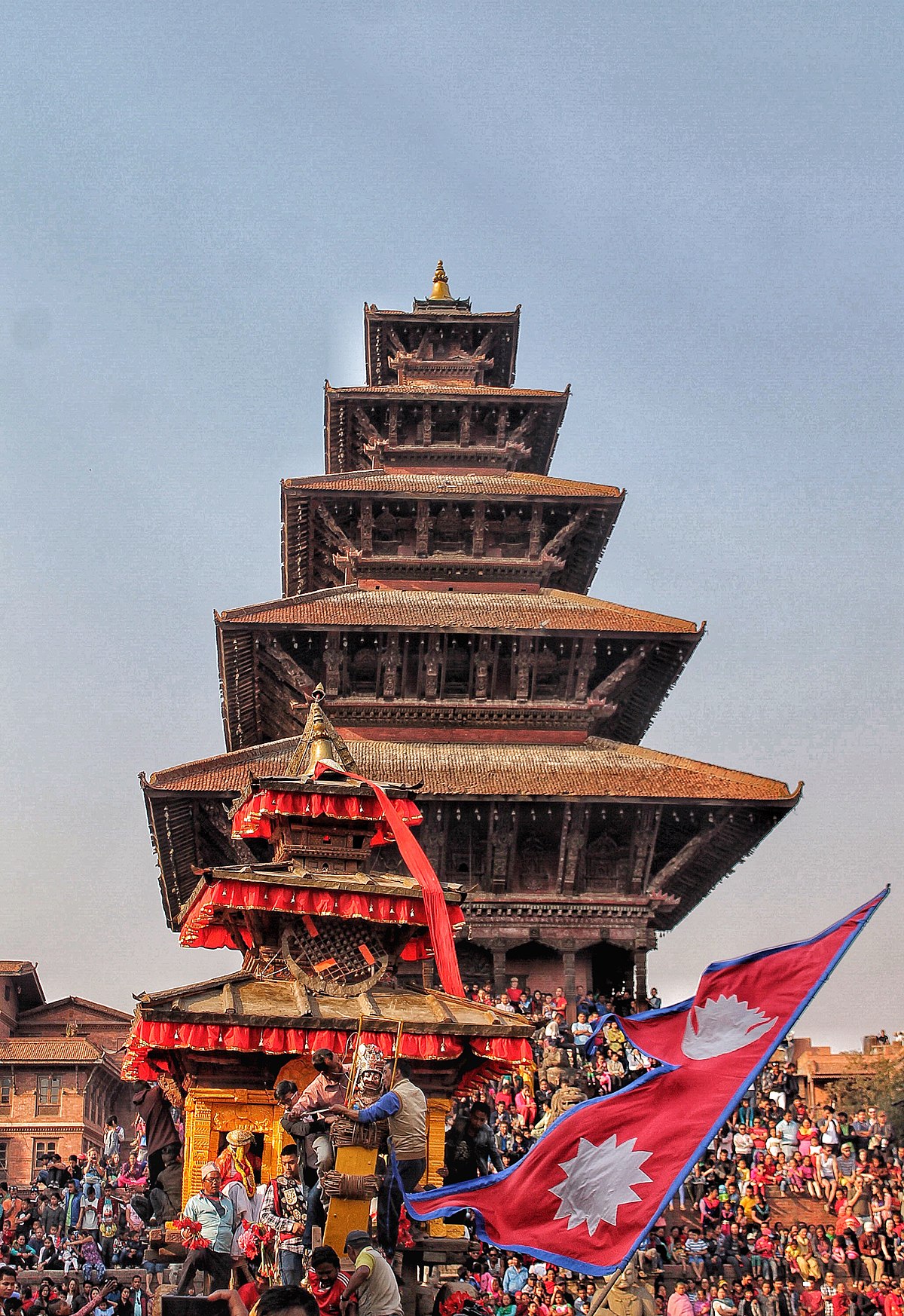 What is the legend behind Bisket Jatra, the Nepalese New Year?

The legend says that a princess was cursed in such a way that none of her husbands had survived the first wedding night.

One day, the son of an old woman was chosen to become her husband. The old woman refused, claiming that he was her one and only son and sole support as she got older. But nothing could be done. Then, a mysterious woman intervened, assuring the young man that he would survive the night if he managed not to doze off.

On the wedding night, the young man kept himself awake. As soon as the princess fell asleep, he saw two deadly snakes slither from her nostrils. The young man grabbed his knife and killed them both, giving back her freedom to the princess.

In the morning, they discovered that the wise counsellor was the goddess Bhadrakali. The deity was put on a huge chariot and travelled all around the city. The king, overjoyed, hung the two snakes on a pole for everyone to see and celebrated the goddess and her husband, Lord Bhairab (Shiva), for many days.

Thus, Bisket Jatra is called the festival after the death of the serpent.

But let’s speak about the Nepalese New Year!

Crowds are gathering in the streets, processions and bands are following one another and the women from the Newar community are wearing their traditional red dresses. During the previous month, two huge carts (rathas) were assembled, one dedicated to Bhadrakali, the other to Bhairab. They travel the streets of the city, pulled by big ropes that make the large wheels with big painted eyes move forward. The chariots are the center of great tug-of-war tournaments during which hundreds of men from the upper and lower parts of the city compete.

On New Year’s Eve, the carts are going down to the riverbank where a 25m pole (lingo) is erected. Then, the men compete to bring down the pole and strike down the two snakes, symbolised by large ribbons hanging from it. Once the pole is down, the new year can begin! If the pole falls in one piece, the year will be good. If it breaks, it is not a good omen…

To discover the images of Bisket Jatra:

We are back on the road for a few kilometers to reach Thimi and celebrate the second day of Baisakh. There, the deities are perched on top of thirty small palanquins (khats) covered with colourful garlands. They are carried all over the city with two large bamboos placed on the shoulders of Hindu devotees. To mark the New Year and the beginning of spring, the locals sing and dance while sprinkling themselves with an orange powder, the “sindoor”, which gradually covers the entire city.

To discover the images of Sindoor Jatra :

Now, let’s leave the colours festival and head for Bode where the same day, you can witness the fascinating Jibro Chhedne Jatra. For more than 400 years, on this occasion, a volunteer from the Shrestha clan pierced his tongue with a thin 25cm spike. He walks all around the city carrying a set of torches on his shoulders. This tradition commemorates the catch of a spirit that had traumatised the inhabitants for a long time. The day the spirit was captured, it was exhibited all along the streets with its tongue pierced. Since then, this tradition has protected the town from misfortune and evil spirits.

Many other festivals celebrate the beginning of the other Nepalese New Years. But joy and colours are always present!

Have you ever celebrated the Nepalese New Year?

Do you have your own New Year traditions?

Tell us all about it in the comments.

This site uses Akismet to reduce spam. Learn how your comment data is processed.